Let's talk on Loyalty, read an excerpt, and enter a giveaway! 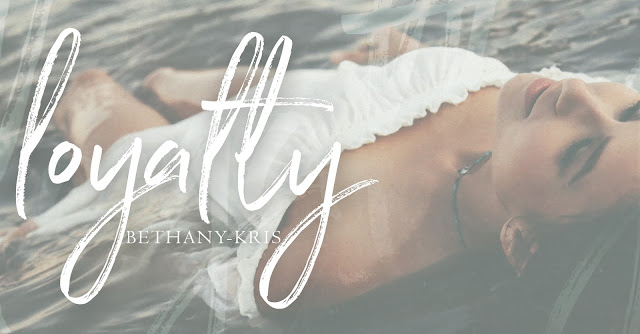 I am so excited.

There's a lot of things I hope to do with this book, but the first and most important thing is I hope to shatter some people's preconcieved notions about being bipolar is like. I don't want to call it ignorance, but most people have no idea what being bipolar and living with bipolar is even like.

Instead, people have this idea of what it should be like.

People think up and down (which is actually called rapid cycling). A lot of people think being bipolar means random, sporadic outburts--angry, or violent. Again, no. Do you know that not every bipolar person has these rapid cycles? And that bipolar is a spectrum--each person with the disorder is different, and experiences it differently?

I'm not going to address that one because I don't have nice things to say in response.

So while I greatly enjoyed writing John and Siena's story, and I hope my readers enjoy it all the same, I also hope to educate a little bit about this disorder.

If you go in thinking you know exactly what bipolar is, and how John should act because of it ... I make no apologies for shattering the preconcieved notions you have, or on the other side of the spectrum, disappointing you for refusing to fall into the stereotypes people have concreted into their brain about bipolar.

Every book is an opportunity for an author.

To educate.
To entertain.

I'm taking the opportunity to do both with the John + Siena duet.

On the other side of the coin ... because we are getting so close to the release, I am doing a giveaway just for fun. Giving away books make me happy.

Want to join in?

Add yourself to my reader's group HERE.

You'll find the giveaway in there.

And because this is a Loyalty post, I will leave you will a short excerpt and some buy links for this book. Everybody seems very curious about the whole Lucia and Renzo phenom, and when their book is coming, so this excerpt is purposely to tease all of you.

Loyalty released on March 5th!
Grab your copy at one of the following:


“Where’s Lucia?”
Lucian passed Jordyn a look, but said nothing. John’s mother quickly went back to putting together the dishes for supper.
John’s youngest sister—the one sibling he was closest to for reasons stemming back to his childhood—still lived with their parents at her age. He tried to make time for her since getting out of prison, but shit kept coming up.
“The last time I saw her was last week after my car finally got shipped in,” John said. “I took her out for a drive. She hasn’t tried to get ahold of me since.”
Which was entirely unusual for his little sister.
Lucian cleared his throat, and came to sit at the head of the table. A seat only reserved for him that no one else was ever allowed to sit in. John wasn’t sure if that was something his father demanded, or a rule his mother made up.
It could have been both, knowing his parents.
“Lucia had to work late at the shelter today,” Lucian said.
John raised a brow. “You don’t sound sure.”
“She’s been … different lately.”
All over again, John’s instincts went into overdrive. If it wasn’t anger, then it was anxiety. If not those, then concern or defensiveness. Sometimes he cycled so fast between them, or ran through the entire gamut of them all at once that it was hard to keep up.
“Different how?” he asked.
Lucian shrugged. “Don’t worry about it, John. I think she’s just made a friend, and while I don’t approve of him, it will run its course soon enough.”
Him.
“Who?”
Lucian sighed. “It doesn’t—”
“It does to me. I look out for Lucia. She’s the only one of my sisters that lets me look out for her. So, who is it?”
“Well, you would probably know him better than I do, but I’ve looked in to him. Renzo is his name.”
John stilled in the chair. “Renzo Zulla?”
Lucian nodded. “That would be him.”
Shit.
A foot solider for a crew John controlled as the Capo. Ren, the guy liked to be called. He grew up poor, and followed the footsteps of his father when it came to running the streets. The guy was nineteen, or maybe twenty.
“I don’t know where she would have met him,” Lucian said, sounding both irritated and confused at the same time.
“I do,” John replied.
His mother looked to him, and so did his father.
“How?” Jordyn asked.
“Me,” John said before scrubbing a hand over his face. “We took a drive, and I had some work to do. Ren was one of those things I had to handle. They didn’t even talk, though. She never even got out of the car.”
“That boy is trouble, John,” Lucian said. “I already had one daughter get mixed up with a man that almost killed her, and I do not want another one falling into the same trap. I don’t know this young man, but I know he did not grow up in a very good situation. That typically means he wasn’t brought up to be a decent man. Hell, maybe he doesn’t even know how to be one. I don’t know, and I don’t care. I just don’t want my daughter involved with him.”
John didn’t need to be told.
Renzo was a street kid that would soon be looking at a prison sentence, or he’d simply serve more time on the streets. So was the way of their life—or rather, Ren’s life.
Lucia was not a part of that world.
“I’ll have a chat with him,” John said.
Lucian cocked a brow. “Do you think you should?”
John didn’t even let his defensiveness come out to play this time. “I think if you approach Renzo, he’ll laugh in your face. He knows me, though. It’s not the same.”
“All right."
That was that.
Email Post
Labels: Coming Soon Excerpt fun stuff giveaway