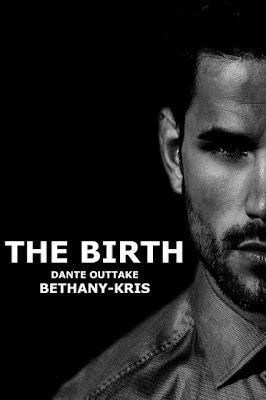 So it is outtake day which means ...

This week I took a break away from the Cross + Catherine outtakes and chose to do one from the request pool. And this particular outtake has been requested time and time again.

So, I do hope you enjoy.

Dante peeled open his eyes, and knew without turning over that his very pregnant wife was not in bed with him. So was Catrina’s ways, lately. Her moods, and sleep—or lack of it—determined whether or not he woke up alone, or warm with her beside him.
He didn’t blame her, really.
Especially lately.
Being nine days overdue to deliver could make any woman restless, and a little snappy. But if that woman was Catrina Marcello?
It could make her downright terrible.
He meant that with love.
Good God.
Dante meant that with all the love in the world because he did. He did adore and love his wife more than anything else in his life. The truth was still the truth no matter which way he tried to spin it, and the truth was that Catrina was ready to have their child.
She had probably been ready a month ago when she accidentally left their home with two entirely different pairs of heels on. Or even when the fake contractions kept her up for hours on end, but every call she made to the doctor about coming in to see if it was real labor usually ended with—call us when you see a show, water, or both. Not the response his wife was looking for, at all.
Or maybe she was entirely over being pregnant and overdue when she suddenly decided that her very expensive maternity dresses no longer looked cute.
He thought they looked fine.
Damn.
She always looked fine.
Even more so now, really. Now when she was carrying his child, and more perfect because of it. It drove him crazy; his need and want for his wife kicked up a notch or two simply because she was pregnant, and entirely his. He told her that—remembered to tell her that as much as he possibly could, but sometimes more often than not, she just didn’t hear it.
Or maybe she didn’t want to hear it.
Normal, his brothers told him.
The end is always the hardest, his mother said.
Get out of her line of fire, his father warned.
Antony had probably been the one that was the most right with his advice. And like Dante when he thought how difficult his wife could be, Antony meant no harm in his words. Not to Dante, or even to Catrina.
It just was what it was.
Rolling over, Dante pushed out of bed, and grabbed the sleep pants he had discarded the night before. Pulling the pants on, he made his way out of the bedroom to find the upstairs portion of his home was quiet and peaceful.
Not unusual for a Saturday morning.
But the downstairs?
It was quiet, too.
That was entirely unusual.
Usually Michel would be tearing up a storm while making his mother laugh. Typically, it was his son who woke him up if Catrina was already awake and getting ready for the day. It was Catrina’s sly way of waking Dante up without her actually being the one to do the deed.
Yeah.
He caught onto that trick.
Not that he minded.
“Where’s Michel?”
Catrina looked up from the cup of tea she was nursing when Dante leaned in the entryway of the kitchen. Her bare face—free of makeup—was fresh, and flushed. She rarely came downstairs in the morning if she wasn’t already entirely done up for the day. Makeup and hair included.
“Lucian came and grabbed him,” Catrina said. “I called and asked.”
“I was supposed to take him for gelato today. I promised.”
Catrina smiled. “Other plans, Dante.”
“Like what?”
“The hospital called—there’s an opening today.”
Oh.
Oh.
They had been waiting for that call for Catrina to go in and be induced now that she had made it past one week beyond her due date. He figured his wife’s lack of makeup, and her messy bun made a hell of a lot more sense, now.
“She’s coming,” Catrina told him.
He grinned.
His principessa was almost here.

“They’re checking her again right now,” Dante said.
Giovanni grumbled on the other end of the phone. “Jesus, how long has she been laboring now?”
“Twenty-five hours.”
“Shit, that woman is probably—”
“You want me to what?” Dante heard his wife snarl.
“Okay, I gotta go,” Dante told his brother. “Update people for me. I probably won’t be on the phone for a while. At least until she’s here, you know?”
“Yeah, sure, man.”
Dante hung up from his brother, and headed into the hospital room. Catrina was sitting up on the bed with her hospital gown back over her legs as she glared at the doctor standing at the end of the bed.
“You have chosen against Pitocin,” the doctor said.
“Because the risk of it turning into one long contraction is not something I want to deal with,” Catrina told the man.
“The Cervadil—”
Catrina looked to her husband. “I’m only at three.”
Three centimeters.
Too many more to go.
“It’s a suggestion,” the doctor said. “A little painful, too, but not as much as the recovery from surgery would be. I know you don’t want to have a cesarean, Catrina. If anything, this could help to open you up a little more.”
“What are we talking about?”
“Using a balloon-like device to open my cervix,” Catrina said.
“No,” Dante said.
The doctor looked at him.
So did his wife.
Only Catrina smiled, though.
He knew what his wife wanted being that she had to be induced, and as little intervention as possible was the way she wanted to go. It was her body. Her choice. If something went wrong, or the baby became distressed, then Catrina was fully fine with stepping back and letting the doctor do whatever was needed.
But right now?
Right now it was all on her.
“At twenty-four hours after the onset of labor, we typically start to consider cesarean,” the doctor said.
“As long as the water has broken,” Dante put in. “And her water has not.”
“But she has been laboring—”
“We’re not discussing surgery.”
“And the baby’s heartbeat is still fine,” Catrina added.
The doctor sighed. “Okay, I will be back in an hour to check you again.”
And have this same useless conversation again.
Dante didn’t bother to tell the man that, though. Soon, the doctor was gone, and they were once again left alone in the hospital room.
“Climb the stairs—I climbed the fucking stairs,” Catrina muttered under her breath.
“Come here,” Dante said, remembering something from their birthing classes. “Here, amore, we’ll do something different instead of walking the halls, and climbing stairs.”
Catrina gave him a look, but held out her hand. He helped her down from the bed, and then pulled his phone from inside his pocket. A couple of swipes on the screen, and soon, he had music filtering into the room.
A fun, fast beat that his wife loved. One that made her dance, and smile.
Birth was painful, yes.
Long, sure.
Difficult and hard, absolutely.
But it was also memorable. And he wanted Catrina to have good memories of the day their daughter was born.
Plus, if it helped her along … well, win-win.
“What are you—”
“Dance with me, regina.”
Catrina cocked a brow. “Calling me Queen right now, bello, really?”
“My Queen is amazing—unstoppable, and she knows it. My Queen likes to dance, Cat. So dance for me.”
She took his outstretched hand, and soon, the two were dancing. It was an hour later when the doctor came in before they took a break.
She was at four, then.
Progress.
Catrina didn’t notice the time crawling by when Dante was making her dance, and keeping her happy. The contractions barely slowed her down, too.

It took:
One deep breath.
One hard exhale.
One more push.
One long cry.
One single tear.
One second of silence.
One wail from a baby.
One amazing woman.
One perfect baby girl.
And everything changed for Dante in the blink of an eye. His life had already been changed once by Catrina, and then again by Michel.
But all of the impossibilities in his life were made possible when a blood-stained, pink-cheeked, dark-haired baby with his coloring, his wife’s features, and their shared life was put into his arms.
Everything that wasn’t …
Everything that couldn’t be …
Everything that shouldn’t …
Suddenly was.
And she was perfect.
Her little button nose, and puffy cheeks. Her eyes that were quite opened fully, and her soft whimpering cries that soothed as soon as he started rocking her. Her little pink lips puckered into a bow, and those tiny little fingers …
All wrapped around his thumb.
Dante fell into a corner chair with his daughter tightly swaddled in his arms, and he didn’t know what to say. He looked up to find his wife was looking over at him with that soft smile of hers—always knowing, but never speaking her thoughts out loud unless she needed to.
“She’s perfect,” Dante said.
Little Catherine.
Beautiful, and full of grace.
A life just beginning.
A soul as old as time.
Perfect, like her mother.
Stubborn, like her father.
Dante’s impossibility.
Catrina’s gift.
And he didn’t know what to say to her.
He waited so long …
He was not supposed to have her at all.
And he didn’t know what to say.
“Say hello,” Catrina whispered.
Dante did just that.
“Hi, sweet girl …”
Catherine’s eyelids fluttered at his voice, but her eyes didn’t open completely.
That was okay, too.
“I’m your daddy.”
Catherine’s eyes opened.
And for a moment, time stood still.
Email Post
Labels: Free Read fun stuff