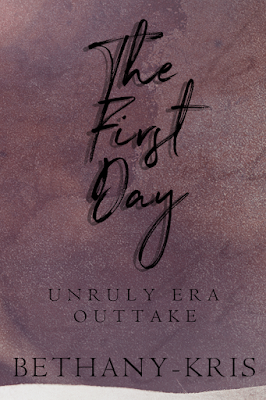 This week, I opted to let the ladies from my reader's group choose whether I would post the last of the Cross + Catherine free read outtakes, or pick one from the request pool. They opted for C+C. So next week, I will go back to the request pool to find you something to read.

If you want to put in an Outtake request (I don't promise anything) then you can do so HERE. Please give more than a couple and nothing else. Something specific you want to see, thanks.

If you want to read more of my Outtakes, find them HERE on my website.

So today is Cece's first day of school.

“Okay, everybody, we have to start clean up, clean up time!”
The kindergarten teacher’s voice traveled over the classroom of overly excited children. Cece, at only five, wasn’t much for getting messy, or being too loud. Not to mention any of the other things these kids were doing. She would much rather be back at home with her ma, daddy, or Nazio.
But Ma said she had to go to school.
Ma said it would be fun.
Ma lied.
Cece had made friends because that was easy for her to do. And sure, she got to wear her pretty outfit, and do her hair nice. Ma even let her have lip gloss because today was a special day.
But people kept bothering Cece here. She was always having to do this, or that. She couldn’t just do what she wanted to do. Cece’s Ma and Daddy always told her to listen when the adults were talking, though, so she was trying to be extra good at school.
It was still pretty hard.
But her favorite thing was supposed to happen soon—after lunch, the teacher was going to take them to the library.
The library was the first place she had gotten to see when her ma had taken her to visit the school. That, and the older girls with the pretty dresses were the only reason Cece was excited to attend.
That, and her ma.
Ma seemed excited, too.
Cece didn’t want to disappoint her ma.
“Cece,” the teacher said, “please go help the other kids pick up the toys.”
“But I didn’t mess them up or play with them,” Cece said.
“You all played with them, sweetheart.”
“I didn’t.”
“Cece.”
She hadn’t played with the stupid toys. They were the kinds of toys her baby brother, Nazio, might play with. But at the idea that she might not get to go to the library, Cece helped everybody else to pick up the toys.
“Let’s line up, everybody, and get ready to go down to the cafeteria.”
A little bit closer to the library.
Cece happily skipped to the spot where the rest of the kids had been directed to stand in line. She liked the way the skirt of her dress swished when she moved, so she moved her hips to make it do the sound again.
Not paying much attention to anyone else, Cece felt a sharp tug on her hair. So hard, actually, that it yanked her head back.
And hurt.
“Ouch!”
Cece huffed, and turned to face the boy behind her.
“Don’t pull my hair,” she told him.
The boy—Matthew—only smiled at her. He didn’t even say sorry!
“Don’t do it again,” Cece warned him one last time.
Cece learned from watching Ma, and Grandmamma, that one warning should be more than enough for somebody to get the point, and stop. If one warning didn’t seem to work, then the person deserved whatever they got.
She gave the boy one more look she hoped was mean enough to make her point, and then turned around to face the teacher coming down the line of kids.
Then, the boy pulled her hair.
Again.
Okay.
She told him to stop.
He didn’t.
Smiling sweetly just like her ma and grandmamma did before they got mad at somebody, Cece turned to face the boy again. He was still smiling in that way of his—a way that her daddy would say was smug.
A smile that made Cece want to punch him in the throat. She saw her daddy do that to someone once. It seemed easy enough.
Cece did just that.
She smiled all the while.
The boy dropped to the floor.
“Cece!” the teaser shouted.
Well, crap.
There goes the library.
Oh, well.

“Wait,” Cross said, “so is the boy also being punished?”
“For what?”
Cross stared at the principal, and hoped to hell the woman could feel his frustration and hatred radiating from his gaze alone. She only stared back silent, and looking stupid behind her too-large desk.
Catherine stepped in to save the day. “I think what my husband is trying to ask, is that will the boy who pulled Cece’s hair be spoken to for his behavior as well? Has his parents been called in like we were?”
“He was punched.”
Cross scowled. “Quite aware, yeah.”
“He is not going to get in trouble because your daughter punched him.”
Catherine cocked a brow.
Cross chuckled at the sight.
Hell was coming, and her name was Catherine Donati.
“We’ve apologized for Cece’s outburst, and you can trust that she will be spoken to—thoroughly. However, do explain to that little boy, and his parents as they probably need a fucking memo, too, that when a girl says no, or asks him to stop doing something, he needs to do that. Instantly. No questions asked.”
“Mrs.—”
“Make sure he and his parents know that should my daughter make her personal space clear again, and he once again violates it and ignores her request, that she will do exactly what she has been told to do.”
The principal gaped.
Catherine tipped her chin up as if to look down on the woman. “I hope I have made myself clear here.”
“You cannot advocate for your child to be violent and—”
“People may not put their hands on my child when she has told them not to. Just because the way she put her hands on him happened to hurt him more than the way he pulled her hair doesn’t negate the fact that he has not yet learned—or not been taught—to keep his fucking hands to himself.”
Catherine laughed, adding, “Unless you’re telling me that I should explain to my daughter that her body and personal space and her ability to be an advocate for those things and herself makes no difference to anyone here at this school. And if that is the case, then tell us now so we can make a choice about our daughter’s education. We picked this school for a reason—it is progressive, and caters to each child’s specific needs. Are you choosing to regress with this nonsense, now?”
“No, no, of course not!”
“Good,” Catherine said.
“I will make sure the boy is spoken to. I do also believe that it may be best for you to also explain to Cece that when she becomes violent as a first response, then she loses her voice. It is overtaken by her other actions.”
Catherine arched a brow again. “So, I suppose she should simply continue to say no, and let him touch her until someone else steps in to save the day, right?”
The principal’s brow furrowed, and for a moment, Catherine’s stance softened. Cross figured his wife had made her point, but she drove it home with one last statement.
“If you changed their ages to something a bit older, and replaced hair pulling with something more physical and intimate, then we’re moving into dangerous territory. Rape culture does not begin with girls showing off leg and bra straps. It starts with girls who learn their voices do not matter when a boy’s is louder, their bodies will not be respected, and young men who have never been taught the word no when they are constantly excused.”
Clearing her throat, the principal replied, “It will be handled.”
“Thank you,” Cross said, holding a hand out to his wife. Catherine took it. “And we will speak with our daughter.”
To explain that she did exactly right.
Cross held the office door open for his wife, and then followed Catherine out. Cece sat on a chair in the corner. Nazio sat beside his older sister, and played with one of his trucks. As long as Cece was nearby, Naz tended to be very well-behaved.
He hoped that stayed the same once the two were older.
Cece looked up as her parents approached. “Am I in a lot of trouble now?”
“No,” Catherine said, “not with us.”
Cece looked at the office door. “But here?”
“You really shouldn’t hit people at school,” Catherine said.
“You didn’t say can’t, Ma,” Cece pointed out.
Cross smirked, but hid it by looking away. Their daughter was a smart girl.
“Did you consider telling the teacher before you hit the boy?” Catherine asked.
“No should be enough,” Cece said. “I said not to pull my hair, Ma, and even gave him the look, too.”
“No should always be enough,” Catherine agreed.
Nazio looked up from his truck. “No touch. No touch—no, Ma. No touch.”
Catherine smiled faintly at Cross. “Why does the eighteen month old get it, but the five year old does not?”
He wished he had the right answer for his wife.
All Cross could say was, “At least we won’t be the parents on the other side of this equation someday.”
“Small blessings.”
Catherine picked up their son, and Cece dropped off the chair when Cross offered his hand to her. The four of them walked out of the office with Catherine and Nazio leading the way.
“Good job,” Cross told Cece quietly.
She preened.
The two bumped fists.
“I know what you’re doing, Cross!”
Of course, she did.
His wife hadn’t even turned around.
Email Post
Labels: Excerpt Free Read fun stuff