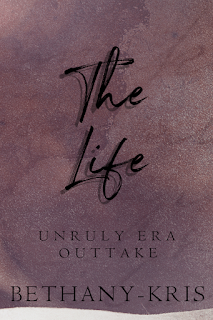 Today is Friday, so that means outtake day! This week is another Unruly Era outtake (I have one more of these to post, maybe two, but we shall see). It takes place about a year after the Epilogue. Readers had asked for interaction between Naz and Cece as young kids, and I threw in some Cross and Catherine as well.

We can't forget about them.

I think next week I will take a break from the C + C outtakes and do one from the request pool.

For those curious, you can find all my free reads and outtakes HERE.
You can drop a request for an outtake (but I do not guarantee writing them) HERE.

Now, onto the words.

“Naz, come touch the water,” Cece called.
Little Nazio didn’t even bother to peer up from the sandcastle he was attempting to build. His focus had been zoned in on that task since they arrived. It was more like a mound of wet sand with his handprints all over it than an actual castle. The two year old didn’t really seem to mind all that much.
“No, Cece—castle,” Naz muttered.
Cece only rolled her eyes, and went back to splashing at the edge of the water. Her bright yellow polka dotted bathing suit stood out brightly against the backdrop that was Jacob Riis Beach. She was fine with wading about knee-deep into the water, but nothing more than that.
Certainly not deep enough to get her hair wet.
Or even her bathing suit, really.
Cece kicked a foot through the water a bit too hard, and splashed a few droplets onto her legs. The six year old screeched her disdain, and ran backwards out of the water like something was after her.
“Such a diva,” Catherine told Cross.
He chuckled. His dark aviator sunglasses hid his eyes from her view. She was tucked tightly into his side on the large blanket. They made it a regular thing to take their kids to one of their favorite spots.
Cross turned his head a bit, and even though she couldn’t see his eyes, she knew he was staring at her. Likely in that same intense way he always did—as though she had suddenly become the sun, and he was the world revolving around her.
Nothing else mattered.
“Wouldn’t happen to know where she gets that from, would you?” he asked.
Catherine grinned. “Nope.”
“So, were going to pretend like you didn’t make me walk very carefully to this spot while holding the blanket just so that no one would accidentally kick sand on it?”
“Listen, nobody—”
“And then you made me pick you so up you could kick your flip-flops far enough away from the blanket before I could put you on the blanket without your feet ever having touched the sand?”
Catherine pressed her lips together to keep from smiling.
Nothing he said was a lie.
Goddamn him.
“Nobody wants sand on their blanket, Cross!”
His lips curved wickedly at the edges. “Mmhmm.”
“Do you want to clean sand off me when we get home, huh?”
Cross’s grin—somehow—turned even more sinful when he said, “You know I love cleaning sand—or whatever—off of you, babe.”
Heat shot through Catherine.
Lust quickly followed.
Two kids, and well into their marriage, and the two of them were still just as crazy in love and hot for each other as ever. All it took was a single look from her husband, or a sexy promise whispered into her ear.
This man had been her first everything—kiss, sex, and love. He taught her about all of it, and somehow things were never boring between them.
“Not here, Cross,” Catherine told him, ignoring the heat traveling over her cheeks and neck. She gave a pointed look in the direction of their playing children. “It’s not like we could sneak off to finish something you start.”
“First of all,” her husband drawled, “we have two men—my men—within thirty feet of us right now. They could absolutely entertain and watch the kids if I needed them to for a few minutes.”
“Only a few?”
Cross pulled down his shades just enough for Catherine to get a good look at his eyes. It was enough for her to know she might have hit a nerve.
Poor man.
“More than a few, then,” she said quickly, winking.
“Thank you.” Cross fixed his glasses once more. “And secondly, you proved my point when you asked if I wanted to have to clean sand off you when we get home.”
“Now—”
“Because regardless,” he interrupted, “you will still make me clean you off twice before you even entertain the idea of getting into our bed. Don’t want sand in the sheets—there won’t be any on you to begin with. You’re a bit of a Primadonna, babe. Own it.”
Damn him.
Catherine pouted. “But you love me.”
“Lucky I do, too.”
She was lucky.
She knew it.
Cross’s arm tightened around Catherine, and pulled her in close to his side once more. His lips touched down to her temple with a light kiss as he murmured, “Love you.”
Catherine smiled. “Promise?”
“Always, babe.”
A screech broke their perfect moment up. They found their two kids ten feet away, and glowering at one another. It wasn’t often the two fought. They were actually pretty good playmates, for the most part.
Not at the moment, though.
Cece was lying on her back covered in wet sand—a sure sign the kid was three seconds away from a meltdown just because she was now dirty. Nazio stood over his now ruined sandcastle that Cece had apparently flattened with her back when she tripped.
“Cece!” Nazio howled.
Cece wailed. “I have sand everywhere!”
“Cece—my castle!”
“It was in the way, Naz!”
Little Nazio looked to his father—all exasperated, yet over the whole debacle in a blink. He never looked more like his father than in that moment. His next words made it all the more apparent, too.
“Oh shit, Da, my castle.”
Cross cleared his throat.
Catherine pressed her lips together to keep from laughing.
“Okay,” Cross said to her, “that boy is all me, though.”
Oh, yeah.
Most definitely.
Email Post
Labels: Free Read fun stuff