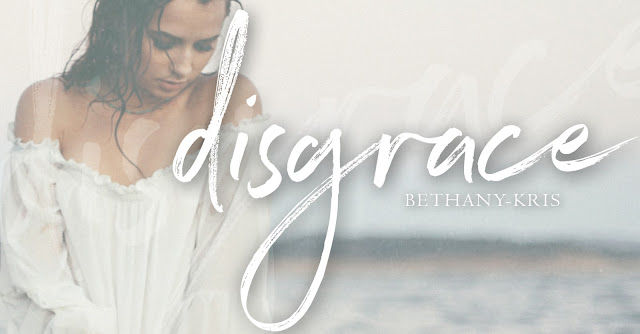 So, this week was kind of hellish and busy for me, so I did not get an outtake done for this Friday. Instead, I figured I could share a small excerpt from Disgrace instead.

Book two in the John + Siena duet will be releasing on April 2nd. Can't wait for you all to get the final end to this tale.

I love these two for more reasons than I care to explain.

And they're on pre-order everywhere!

So grab your copy at one of the following vendors:

And add to Goodreads HERE.


Siena didn’t even bother to look up from the dishes she was washing as her mother and brother slipped into the kitchen. Coraline moved toward the island where a plate of hot food had been left to sit out for her, and looked it over.
“Really, Siena, chicken alfredo?” her mother asked.
Siena kept her attention on her work. “It’s Giulia’s favorite. I was trying to make her comfortable.”
Coraline made a noise under her breath.
It sounded a lot like disgust.
“It might have helped had you shown up like you were supposed to for dinner,” Siena added. “They were looking forward to having an actual conversation with you, Ma.”
Siena did turn around and chance a glance at her mother, then. Coraline looked like something awful had been shoved into her mouth. Horrified, displeased, and disgusted all at the same time.
The last thing this woman wanted to do was greet, be nice to, or handle anything about her husband’s mistress’s children.
It wasn’t like it was the girls’ fault. They hadn’t asked to be born, or for their father to be an unfaithful bastard. Yet, here they all were.
Coraline had been perfectly fine, pleased, and pampered in her life before Matteo’s death. She had not minded turning cheek to her husband’s behaviors, and dalliances with women. She even pretended like she didn’t know her husband’s mistress had once lived in a bigger house than she did simply because she birthed him the same amount of children that Coraline had given to Matteo.
No, none of that had mattered to Coraline before.
Now, with Matteo dead, and the girls’ mother dead, Coraline had no choice.
Despite knowing it might cross one of her brother’s many lines, Siena didn’t mind reminding her mother of her place at the moment. Sometimes, it was the only thing that actually worked where Coraline was concerned.
“It would not look very good for you to shun the only Calabrese principessas della mafia,” Siena murmured, letting her finger edge along the line of the island as she spoke. “Even if those mafia princesses are illegitimate daughters born from a several decades-long affair. You know this, Ma.”
Coraline scowled.
Kev passed a look between the mother and daughter, but said nothing.
“They are not the only principessas of this family,” Coraline said, smiling in that cruel, cold way of hers. “And don’t you forget that, Siena.”
Dread slipped down Siena’s spine.
A cold fear met it with open arms.
Siena knew all too well how open and vulnerable she was to her brothers’ games. She could just as easily be used as fodder for her brothers’ plans as her half-sisters.
And shit …
Maybe better her, than them.
Siena didn’t show her fear, or her weakness. Not to a woman like her mother. Coraline ate that shit for breakfast.
“Maybe that’s what bothers you the most, Ma,” Siena said, shrugging. “That one of the illegitimate daughters will be used before I ever am—the only legitimate daughter. Your daughter. What a fucking shame that would be, huh?”
Coraline’s gaze narrowed.
A silent threat.
A vicious promise.
“Legitimate in name and birth only,” Coraline hissed right back. “We all know how you’ve betrayed this family with all you have done to us, Siena. None of us will ever forget the disgrace you are. Marrying you off to get you off our hands, or getting rid of you by some other means would be a blessing. Nothing more.”
Kev chuckled. “She’s got a point.”
What a life this was.
The disgraced one.
Siena wished she cared.
Email Post
Labels: Coming Soon Excerpt
Reactions: