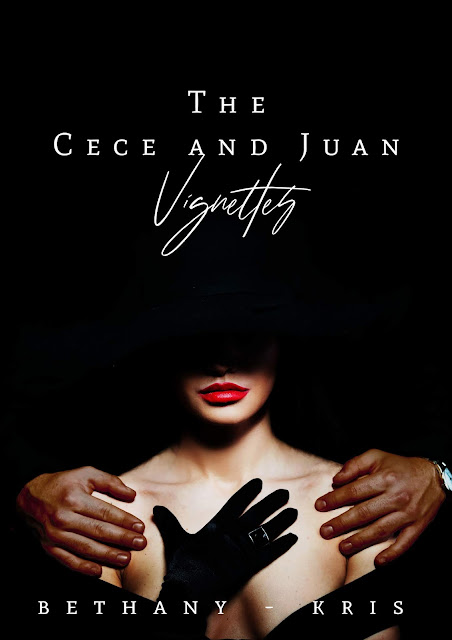 Hey, loves! We’re back for another chapter of the blog series. I think we have another 7-9 chapters, maybe less, and we’re done with this blog series. It’s been a trip. Enjoy.

“Cece, if you’d just—”
“Right now, I would rather not, Juan.”
The sharpness in her tone should have been enough to tell him to back off, but he found that really difficult to do where Cece was concerned. He knew she needed space and all, but whenever she was pissed off at him, there was only one thing he wanted to do about it.
Fix it.
Problem with that—at least this time around because Cece didn’t mad at him very often—was that Juan hadn’t done anything wrong. In fact, he’d done his fucking job and pulled her from an unsafe situation with a client. Shit, maybe the guy hadn’t crossed any obvious lines because Juan had been watching very fucking closely, like he was supposed to do, but that didn’t really make a difference to him at the end of the day.
The man’s tone said enough.
His suggestions.
And the way he looked at Cece when her back was turned?
Fuck all that noise.
The asshole wasn’t any different on the surface and on paper than any of Catherine’s other clients that were on Cece’s list to handle when needed. Too rich for their own good with more money than they knew what to do with. Arrogant to the point that Juan regularly wanted to punch him in the throat. Overly privileged.
Nothing new.
Except something was just off.
And he didn’t ignore that feeling in his gut. It served him well up until this point in his life, and he highly doubted that was going to change any time soon. Juan was fine with that. It was just Cece that had to get on board with the program.
“Are we going to at least talk about—”
She shot him a burning look over her shoulder in the elevator. “No.”
“But—”
“Juan, I’m over it. It’s fine.”
Ha.
Ha, ha, fucking ha.
It was not fine.
It was never fine when a woman dared to speak the word fine. Juan was not so stupid or young enough of a man that he didn’t see that shit for exactly what it was.
That was bait.
A trap.
And he wouldn’t be the asshole who fell right into it.
“All right,” he said, swallowing the next words that threatened to come out of his mouth. No doubt, Cece would eventually come around and they could talk about it.
But fuck.
He hated fighting with her.
They didn’t fight, really.
Not over shit like this.
And yet …
Here they were,
Juan remained quiet as the elevator climbed the remaining floors to her LA penthouse. When the doors slid open, she stepped out without so much as looking back over her shoulder at him. He wasn’t offended at that, and made sure to keep a couple of paces between them as he walked her down the hall to her front door.
Cece fumbled with the keycard for her door, the only real show of her anger now—her fingers wouldn’t cooperate. To save her the trouble and more annoyance, he pulled out his own that she’d given him a year ago when she first bought the place. He had his own across town, too, but more often than not … they woke up together now.
Who knew, though?
That could change.
Things were always changing.
“Thanks,” she muttered when the door popped open.
Juan nodded, and waited for Cece to step inside. He, however, didn’t follow behind her like he usually would. Instead, he leaned against the wall in the hallway as she kicked off the heels that showed off those long, shapely legs of hers and had been teasing him all goddamn night.
Not that right now was the time for that.
He kind of wished it was.
After she’d shed all the things that she didn’t want to wear or carry, Cece turned to him with heavy shoulders that sunk a little too much for his liking and a frown that made him want to kiss right off her pretty face.
With him, she should only smile.
That was his goal.
“I know shit was off,” she started, “but I had it handled.”
“Maybe that’s the problem,” he returned, “you know?”
“No, I guess I don’t.”
And that was another problem.
“You felt it—something wasn’t right. But you were willing to ignore it for the sake of getting the delivery done to the client, despite the fact he changed the location and ended up bringing you into a situation where there would have been no one there except you and him. It felt bad and you ignored it. It’s intuition talking to you, Cece. Don’t pretend like you can’t hear it. That’s when bad shit happens.”
That’s why he was there.
“Even if something did go bad—”
“It didn’t. And I know you’re going to say you can handle it, but that’s why I’m there. So it doesn’t happen in the first place. I did my fucking job. I won’t apologize for it, either.”
Her jaw hardened.
Fire came to life in her eyes.
Juan let her have it.
She was due it, after all.
“So, that’s how it’s going to be working together, then?” she asked.
Juan nodded. “Pretty much.”
“Always?”
“If it means you’re coming back here every night, even if you’re pissed off at me, then yeah. Always.”
And she could like it or not.
That was up to her.
Juan was still doing him.
Email Post
Labels: Cece and Juan Free Read