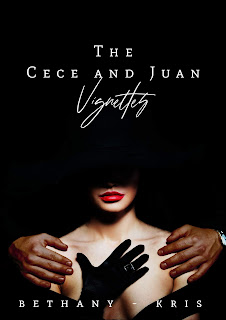 Hey, loves! We’re back for the next chapter of this blog series. Do enjoy.

“So, despite how often I hear your father whine and moan about getting you to move back to New York, it’s never going to happen, is it?”
Cece grinned at her grandmother’s question, but hid it well enough when she glanced to the side. That way, she could watch the cars speeding past on the Manhattan street instead of at her grandmother who was entirely too perceptive for her own good. Then again, all the women of her family seemed to be that way. It was why she had never been able to get away with shit.
Or maybe it was just because everything she tried to do, they had already done a million and one times over. They knew what to look for.
Either way, she loved them.
And it.
Mostly.
“I … like LA,” she settled on saying.
“Let’s just call it what it is, Cece,” Catrina replied, not unkindly, “and say you’re an LA girl and New York just doesn’t do it for you.”
“That’s partly the case.”
“Mmhmm. I imagine the man you keep there doesn’t hurt either.”
After she said that, Catrina made a point of glancing over her shoulder—not at all with any subtlety—to pass Juan a look who stayed a few paces back from the grandmother and granddaughter duo as they went about their day in upper Manhattan. Which mostly, for them, meant lots and lots of shopping—tens of thousands of dollars spent, a good meal at a Marcello-owned restaurant, and then they would see where the day—or evening—took them from there. As was usually the case whenever she got together with her nan.
She loved Catrina.
Inexplicably.
A lot like her ma.
“To be fair,” Cece said, “about the man, I mean … it’s not like he’s ever said something about it one way or the other. He’s not asked me to move to LA or live there. I did that all on my own because it’s where I wanted to be.”
“Mmhmm.”
“It is.”
Catrina winked with a smile. “I know it is. It was bound to happen. Like your father, though, don’t expect me not to occasionally make it known that I wish I could see you more than I do. That’s all I’m saying.”
Cece laughed. “I know, Grandmama.”
“Not that it matters what any of us think.”
“Oh?”
Catrina shrugged, fixing her black sun hat as she glanced up at the too-bright sky overhead. “Of course, not, Cece. You’re doing great things all on your own and without our input, why the hell should it matter?”
And that was exactly why she loved her nan.
Amongst many other reasons.
She never felt judgement from her grandmother for any of her choices. She could always go to Catrina for anything at all—just to talk, for support, or whatever else she might need. The door was always open. Never closed.
When she needed advice on the business, she came to Catrina … if it was something her ma couldn’t handle for her. She kind of felt like, growing up, she had had the best women around her to raise her.
One of them had been her grandmother.
She was grateful.
“Now,” her grandmother said, coming to a stop in front of one of their favorite boutiques, “one more shop, I think. Juan, you don’t mind carrying another bag or two, do you? We’ll call the driver to come around the block.”
Behind them, Juan smiled. “Don’t mind at all, Catrina.”
Though they’d been shopping since the morning.
One more shop was definitely a lie.
He still smiled and said yes.
He wouldn’t complain a bit.
More than once, he’d told her that he would do anything with or for Cece as long as she was there to do it with him. That was when he had the most fun. Even if it was something as mundane as shopping for hours and carrying her bags. It reminded her of when they were younger and he would sit beside her on a blanket and do absolutely nothing in the summer while all the other kids played around them.
Her best friend until the end.
He truly was great.
Juan was kind of perfect in that way.
“We appreciate it,” Catrina said.
“Of course. Anything for you and Cece.”
Turning slightly, her grandmother eyed a black car that passed, and under her breath, too low for Cece to hear, Catrina said, “And if you haven’t figured this out yet, marry that man. Marry him as soon as you possibly can, Cece. And don’t look back.”
Cece only smiled.
That was the plan.
Someday.
Email Post
Labels: Blog Series Cece and Juan Free Read fun stuff