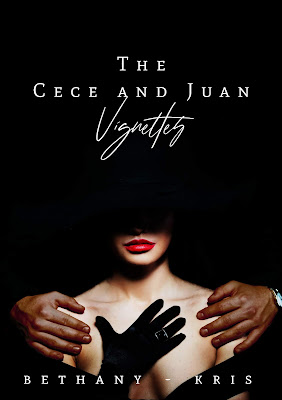 Hey, loves! We’re back for the next chapter of the Cece & Juan Vignettes. A note about this vignette: if you want to see the--kind of/was it?--proposal between Cece and Juan, that was written in the Cross + Catherine companion. You can grab it HERE.

I have gotten a few messages from people who - tend to think I give a lot of content to my readers for free without asking for something in return.

I do outtakes, blog series, and any other extra bits on here, in my group and whatever because I want to. I like doing these. If I need a break, or I need to slow down - I actually have, in some aspects - then I will do that, and of course, let you all know.

I do, in a way, feel like my readers give me quite a bit in their support of me - by buying my books, saying hello, liking a post, reviewing, blogging ... if you engage with me and my work, you are supporting me. And thank you for that. It's all I ask for.

But hey, if you're one of those people who feel like you'd like to support me in another way, or you just want to say thanks for something? I did Ko-fi for you - and it's cool for me, too.

Wanna buy me a coffee to say thanks? (really, it'd be a SuperSour Rockstar, come on).

You can do that on my Ko-fi.

And if you do, thank you.
Do not feel like you have to.

Back to the blog series ...

“Hey, wait a sec.”
Cece’s hand reaching for the passenger door of Juan’s Maserati—the only vehicle he kept stored in New York for their frequent visits—hesitated before opening the latch. She glanced back at him over her shoulder; the nerves in his heart settled the second her gaze landed on him.
He really didn’t have any idea why he was nervous in the first fucking place. It wasn’t like he’d never done one of her family’s large dinners before. All the cars in the gated drive, he pretty well could list every person that owned each one by first and last name.
Still, just glancing up the drive at the familiar three-level home had his heart feeling like it might beat right out of his goddamn chest. His hands might be sweaty, too, but he wasn’t going to check when he’d rather just keep gripping the steering wheel like it might save him.
“What?” Cece asked.
“You know this is the first time we’re going to officially tell your family we’re engaged, yeah?”
Cece blinked.
A second passed.
Then, two.
Finally, she simply asked, “And?”
“That doesn’t make you nervous at all?”
“I mean, no?”
Then, Cece cocked her head to the side a bit. Her gaze narrowed slightly, drifting from Juan to the home ahead and then back again. It took her another second before she decided to speak, but as she did, an almost knowing grin curved her lips.
God.
He loved when she did that.
Teased him.
She was the only female he’d ever let do it, too.
“You’re nervous?” she asked.
“Don’t make a thing out of it. I just had a moment and all. I mean, you’re family is great … they’ve always welcomed me in and—”
“Hey,” she interjected quickly, leaning across the seats to come far closer than Juan had been expecting. In a blink, she closed the last bit of space between them to press a fast, hard kiss to his lips. Her mouth moved against his—their familiar war coaxing an approving groan from the back of his throat until she pulled away with another one of those smiles of hers that he loved so damn much. “They welcomed you in a long time ago and you know it. Don’t be nervous. Besides, now that we have a date for them to save … the next few months are going to be just one big party.”
Juan chuckled. “You think?”
“You’d think being around Italians, you might know more about us. Shame … you’ll learn.”
That time, he grinned.
“I don’t mind.”
Cece winked. “Are you good?”
He dragged in a heavy lungful of air, nodding with a smile. “Yeah, babe, I’m good.”
“Let’s go.”
Before he could even unbuckle his belt, she was out of the car and heading for the house. Juan had to take a moment to appreciate the sway of her hips in those straight-leg jeans, her loose crop-top of pink silk falling to just below her mid back, giving him a peek at tanned skin. The click-click of her sky-high, strappy heels had him moving out of the car to follow behind as fast as he possibly could.
By the time she reached the front veranda, his hand found her lower back when she moved into step with her. He’d just pressed a kiss to the side of her temple when the front door to the house blew open.
Confetti made of gold and black and silver came out to shower them in color while the gathered people in the house started hollering loud enough that before the night was over, the whole block would know Cece and Juan were engaged.
Congrats were shouted.
Laughter colored up a dark street.
Someone already had bubbly waiting, too.
It sprayed all over the deck.
Juan hadn’t been expecting any of that—but the knowing glint in Cece’s eye when she looked his way with a happy smile told him that she very well had.
His nerves finally disappeared.
For good.
“How did he propose?” someone called out.
Cece and Juan laughed.
It wasn’t an easy answer.
She smiled with a shrug. That smile was enough to tilt his whole world sideways.
“Well, I kind of did? And then he did? Anyway. He broke my necklace—the ring was hidden inside. I guess … it was always there. Waiting for the right moment.”
Any moment would have been right.
They were them, after all.
Still, Juan nodded and said, “Yeah, I was just waiting for that moment.”