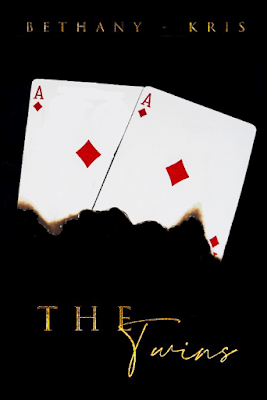 Hey, loves! Can you believe it's DECEMBER?
But also that Marcus released yesterday, so um, that means EVERY Guzzi Legacy novel is now live? I know some people have been waiting for the entire series to publish before they started with book one, so I am sure those people are having a time binging the series.
If you haven't picked up Marcus yet, shop him HERE.

Welcome back to The Twins blog series. Do you need to catch up?

Now, onto the chapter.

“Oh, that one,” Cara said, her finger tapping the screen while she gestured at the photog’s assistant. On the computer screen—where the photog’s team had their entire set up ready for them to easily look over the pictures and do any surface editing during and after the shoot—a particular shot of Beni and Bene sitting on the floor with baby Marcus between them was blown wide on the large frame. “Mark it down? I know the perfect spot for it.”
August grinned, never unamused with her mother-in-law’s passions. Because they never ended. The woman found as much creative energy in reading and writing as she did photography and even gardening. Just to add to it, Cara also managed to raise four sons, maintain a career, as well as being a wife and her own woman. And since most of her sons had married now, Cara still didn’t stop.
In fact, she brought her son’s wives into the family folds as though they had always belonged there. She made time for each of the girls whether it was coming over to chat over coffee and sweets or reading a book together and chatting about it every night on the phone.
People liked to say that family was everything.
Cara Rossi was the definition of it.
That was … inspiring.
Pretty fucking bomb, too.
“Where did Vanna go?” Cara asked absently, her finger swiping across the screen to go from one picture to the next without barely a second between each one. And then all at once, she would stop on an image, the assistant behind them would mark the number down, and off she would go again.
“Somebody got poopy.”
And not that August would say anything about it, but that was one big reason why she didn’t plan on having kids any time soon because the thought of changing a diaper kind of made her want to gag. So …
“Ah,” Cara murmured. “Did you have a preference for which ones you might have prints of for your place in Chicago?”
“A couple—you know he wants candids.”
“Both of them. They barely indulge me.” Then, Cara laughed. “That’s a lie—they indulge me too much, but never tell any of them that.”
August grinned. “Promise. Cross my heart.”
Cara went back to scanning through the photos while August’s attention drifted to where Bene and Beni were now standing next to the bay windows of the grand entry. With the family photoshoot done and the photographer and his team packing up their lighting equipment while Cara went through the photo files to pick out her favorites, the twins were free to do what they wanted.
Good thing.
They hadn’t stopped complaining all day.
Mostly, it was amusing. One could tell how much Bene and Beni were loved and spoiled by their parents. Maybe because they were just … special. Or because they had been the babies of the family. It didn’t matter … somedays, like today, their privilege showed a little more than on other days.
Lucky for her husband that she loved him.
But she was lucky too.
Look at all Beni gave to her.
At the moment, however, the twins took advantage of the fact that nobody’s attention was currently on them. Beni scrolled down his phone while Bene used one hand to text on his own. Side by side, it was impossible to find a difference between the two when they both wore nearly identical outfits with black slacks and similarly colored dress shirts. Of course, if one knew … they knew.
Beni was always on the left.
Bene on the right.
Distracted, the two didn’t seem to realize how much of their little actions mimicked the other. Like the way Beni tapped his index finger against the side of his thigh—Bene did the same, yet he wasn’t even looking at his twin. One started shifting their foot backward on the spot, and the other soon followed until they matched postures again.
“How long have Beni and Bene done that?” she asked. “The … mirroring?”
Cara peered away from the screen and eyed her sons as she took in what August had noticed. “Oh, that?”
She’d noticed it before.
Never asked, though.
“Yeah.”
“Since they were brand new,” Cara said.
“Really?”
“I always told Gian it was muscle memory.”

“Look,” Gian murmured.
Sleepy, Cara rolled a bit more to her side to see what had her husband so fascinated. At five in the morning, they should have put the freshly fed twins—Beni and Bene—back into their own crib so that maybe they could get another hour of sleep before the rest of their hoard of boys woke up. Instead, they liked this time.
These quiet moments.
Just them and the babies.
They tried to soak them up.
“What—”
“Shh, watch,” Gian said.
Between them, the twins had fallen asleep side by side. Beni on the left, of course. Bene slept on the right with his hand pressed against his lips so he could suckle the way he liked after a feeding.
“Watch their little toes and fingers,” her husband said.
She did.
When one twitched, the others did, too.
The same spot.
Just the opposite.
Soon, Beni had brought his hand up to suckle like his brother was doing. They looked like perfect little mirrors of one another.
“They do that a lot,” she said. “Muscle memory, maybe.”
“I doubt it’s that.”
“Well …”
She did think the mirroring was a little odd. Only because she didn’t understand why. But it was also quite wonderful. Would it stay the same when they got older?